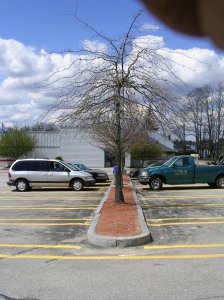 Trees are the wonder of nature, they are the largest, tallest living things. there are trees that can reach to heights of 370′ and there are trees who’s  trunks can have diameters of more than 30 to 40′. They can live for hundreds years and some live for thousands,  which in human terms are hundreds  of generations. Some trees have a root mass that is equal in weight to all that growth above the ground and their roots can spread more than one and half times their height in all directions looking for moisture and nutrients. They are the basis for all of life on the planet, without them many other species couldn’t survive.

In their natural environment you might be able to identify the soils condition by what species are growing there. For the trees that are growing in a flood plain would most likely would not be growing in upland, shallow soils. Or trees that grow high on the slopes of mountains might never be found growing in areas such as  wetlands. To see pitch pines growing you can assume that  it’s habitat is a gravelly, excessively dry with infertile soils. The reverse is true in that by looking at the different types of soils one could predict what type of plant species would be likely to grow under natural conditions.  Trees have found their place locally, regionally in their northern migration over the course of these last 8 to 10 thousand years, in the conditions that have best suited them. In a booklet published by the U.S. Department of Agricultural Forest Service titled ” Why trees Grow Where They Do In New Hampshire Forests” prepared by William B Leak and Jane R Riddle with some beautiful illustrations by Marilyn Collins, it discusses the makeup of NH soils and the habitat these soils create for trees and other plant species. It is in relationship of time from when much of the New England was under a blanket of ice and as this ice advanced it scoured the bedrock, carried small particles to huge boulders along with it. Until a time that ice began to melt and this release of water that created huge lakes and rivers, where some of the material settled where it had been frozen or where other materials was carried along with the waters’ flow until that slowed and some of the larger size particles of sand and gravel settled and finally the fine particles of silt and clay settled where the water’s flow was greatly reduced. Leak and Riddle in their work defined 9 types of soil habitat, realizing that there are many more than a washed till habitat to a poorly drain one or lake sediment to a rock habitat. This booklet which is out of print will be posted on our web-site.

It isn’t always the case that only certain trees or plants will only grow in one habitat , many are suitable to different soil conditions and most will do well in a nutrient rich, moist soil. Other factors also have to be considered such as the climate of a site, moisture, availability of seed from a particular species and previous disturbances both natural and man-made. In the microclimate of a site such as  the difference from the south to north side of a hill or mountain, the slope incline, does it have flatten bench areas that might slow the flow of rain water, collect organic debris that offers a uniqueness to a site and what may survive there? Moisture is always important to plants, what type of soils, where sand and gravel tend to be excessively well drain depending the depth of the imperative bedrock below. Or clays and slits that will be excessively wet usually in the spring and fall, but tend to be hard to remoisten when dried out during the hot summer months. The other factor in habitat is disturbance; what plant species might have been growing, when a fire, wind or ice storms,  or a hurricane has occurred and after an occurrence what species had the opportunity to migrate in where other species didn’t survive. Man has also been a huge influence having disturbed much of region and  having caused changes in the habitat and what species might have remain and where others that established themselves anew.

Yet trees are also survivors, their seeds can spout on top of stone outcrops or in cracks of broken boulders and can grow to an age when they might set their own seed. They are also survivors for they manage to live in places where we stick them, even in the middle of parking lots or small island planting beds. They certainly have to try to adjust to conditions, that if they were to naturally migrate it wouldn’t necessarily be in the place we stick them. When we do stick them into places where their root can’t spread or where there aren’t any nutrients in surrounding soils, we have in some ways taken young trees and have applied a form of bonsai to them, thou maybe not under the same conditions as if we were truly trying to create a bonsai,  by placing them in soils that would not be suitable, nor allowing enough area for root growth, but then expecting them to grow happy and healthy.

We all understand the practice of bonsai, to restrict and manipulate root growth to stunt the top growth and to keep them small by allowing  them to grow only fractions of an inch where in normal conditions they would grow inches if not feet per season. The medium that a bonsai grows is a mix of usually a loose, fast-draining components, often a base mixture of coarse sand or gravel, fired clay pellets, or expanded shale combined with an organic component such as peat or bark. The inorganic components provide mechanical support for bonsai roots, and in the case of fired clay materials—also serve to retain moisture. The organic components also retain moisture and may release small amounts of nutrients as they decay which is usually supplemented by small, regular doses of fertilizers. Well-cared for bonsais can live for many years, some even for hundreds of years.  I once had a chance with a group of people to visit the home of Dr. Dave Allen who had been New Hampshire’s State Biologist many years ago. One of his many passions was to grow outdoor bonsais, his choice of plant materials was usually the trees that grew on his property. There was one example, I clearly remember, it a white pine, for as he told it, there had been two white pine seedlings, one he used to bonsai and the other remained in the ground. Then thirty years later, one tree was about 50′ tall, yet the other sitting in a pot and less than three feet. To see both those trees looking healthy, both the same, yet so different, you had to acknowledge that it was a wonder of survivability of a tree that had been so manipulated, yet able to grow, if only at a faction of how they might do under different, more favorable conditions. It was the care he gave to his trees that allowed them to survive,  whereas many trees in our manmade landscapes  do not get that that kind attention from soil habitat and the relationship of soil to plant species. Nor of the requirements of  trees and plants to their roots  and many times we wind up practicing a form of bonsai where trees are stunted in growth, prone to environmental stresses, diseases and many are short lived.

Of course, there are differences between a natural landscape and a man-made one; in the natural landscape it is one change, opportunity, succession and maturity that spans decades, centuries and millenniums. In a man-made landscape the time line is much shorter, a matter of a few years to that of a few decades, it is also one isn’t subject to change, opportunity nor succession rather just to maturity and then maybe to just start over again after the plants outlive their usefulness, to the space that was provided to them or the fashion of the time and the landscape looks dated.

For now, I will leave it and hope to write again when the circus comes to town.

Note: Picture above is a pin oak (Quercus palustris) planted in 1989, the fact that it is still alive is a wonder of nature

2 thoughts on “Bonsais, a Circus of Trees and Every Thirty-Five Feet Part 1” 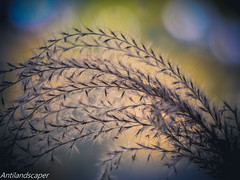 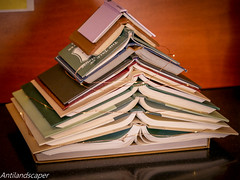 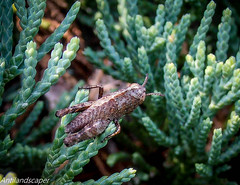 Philosophy is all about being curious, asking basic questions. And it can be fun!

A Londoner and a San Diegan

LOVE IS THE ANSWER

A boisterous introvert illustrating her way through life.

All There For You

To Travel is to Live

Random environmental stories, book reviews and something like poetry.

learn the language itself, not memorize words

A Petite Girl's Guide to...